(Sovereign Military Order of the Temple of Jerusalem)

Our investitures in 2021 ans 2022 had to be canceled due to the Covid pandemic
1ère Investiture le 24 Janvier 2010 à Manille
1rst Investiture in Manilla, January 24, 2010
Nous avons eu la joie d'accueillir parmi nous plusieurs nouveaux membres.
Le Prieur , chev Jose Adolfo Da Cruz, a reçu des mains de notre Grand Commnadeur International,Emeritus  la charte du Prieuré
D'ores et déja , Rendez-vous est pris pour une nouvelle visite en début d'année 2015.
We have been honored to receive new members .
Our prior chev Jose Adolfo da Cruz, has received, from the hands of our  International Grand Commander, Emeritus and past Grand Prior of France, our mentor organisation, the charter of the PRiory
We have already planned a new visit early 2023
MESSAGE DU PRIEUR  Chev José Adolfo Da Cruz
Your Excellencies, Brothers and Sisters of the Order of the Temple,
on 24 January 2010 in the City of Manila, Philippines, the Preceptory of the Philippines (under the Protection of GP France) held its First Investiture Ceremonies where two (2) Knights and one (1) Dame were admitted as members of the Order and one (1) Squire was received.
The simple but very solemn rituals were held at the Chapel of Our Lady of Guadalupe in Fort Santiago which is within the medieval walled City of Old Manila called Intramuros which is a very appropriate setting for Investiture Ceremonies of our Order.
The successful event would not have been possible without the Grand Prior of GP France, who came all over Paris, France, as the presiding officer of the Investiture Ceremonies. This is also not to mention the presence of a visiting Dame of the Order from GP USA who came to help with the rituals.
The preceptory has been raised last january, 2014 to the status pf Commandery under teh mentor Grand Priory of France, by our international Grand Commander.
We then held a formal call with HE the Honorable Feliciano BELMONTE, House speaker , and other representatives. Human Rights, Women empowerment, access to clean water and building bridges for peace where the topics adressed.
As the Philippine Islands comprise 7,100 islands, indeed the task of building the strong presence of the Order across the archipelago is challenging but not impossible. Because of this, the  now Commandery of the Philippines has embarked on a recruitment effort and by January of 2015, we will be holding another investiture ceremonies to admit more members to become part of our Order.
With our Lord's Grace, the Commandery  of the Philippines can be elevated soon in the future to Priory
Création d'une chapelle
Creation of a new chapel : 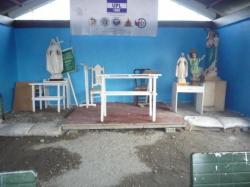 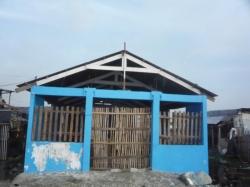 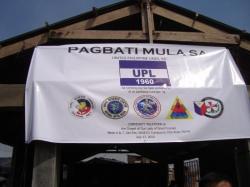